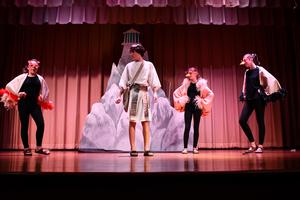 Several weeks ago, Mr. Penwell and his cast of students delighted audiences for two nights with their performance of Hercules.

Hercules is a comedy adventure that sends the title character on a series of impossible tasks to win back the love his girlfriend after his evil stepmother Hera curses her with an anti-love potion. What seems like an impossible challenge turns into a hilarious series of events that ultimately leads to Hercules’ success.

This play was incredibly fun for both the audience and students. We had 31 students as actors, as well as 4 students who helped run tech. They committed to two months of rehearsing after school to put this show together. While several students had been on stage before this show, many of the students stepped into the lights for the first time. Each student found something that they enjoyed and can be a part of their lives for many years ahead.

The show was truly a team effort. Parents, teachers, and students from all over the school helped bring the show to life. Our theater program is proving to be a place where the whole school can come together to create a piece of art that everyone can enjoy.

The theater program at Greenfield School is growing, and we cannot wait to see where it goes next!