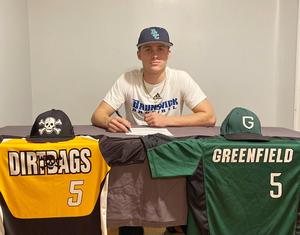 The son of Jason and Mandy Holland of Micro plans to major in marine biology, marrying his two biggest passions since childhood — baseball and the ocean.

Add Justin Holland’s name to the list of senior high school baseball players who have had to find alternative paths to their desired collegiate destinations in the wake of the COVID-19 pandemic.

The Greenfield School senior had — and still harbors — aspirations of playing at the NCAA Division I level, but after the association opted to give all 2020 seniors an extra year of eligibility, the shrinking scholarship numbers for incoming freshmen left a slew of players on the outside looking in as far as dollars are concerned.

As a result. Holland began researching his options to play one to two years at the junior college level in the hopes of reappearing on Division I radars when the pandemic subsides. When the chance to be near the beach at Brunswick Community College materialized, that was too much to pass up for the 5-foot-10 Holland, who recently signed his National Letter of Intent with the Dolphins of the National Junior College Athletic Association Division I ranks.

“Whenever I first started looking into the JUCOs, into going that route, I knew from the second that I looked into Brunswick that I wanted to go there,” Holland said in a telephone interview Wednesday night. “Location has always been a big thing for me. I’ve always wanted to be there at the beach, and so I told my parents that if they offered me, I was going to take it.”

Holland chose the Dolphins over other NJCAA interest from Louisburg and Southeastern Community College. NCAA Division II interest surfaced from UNC Pembroke and Flagler, with the latter set to evaluate Holland in person in a camp setting.

But when Holland’s travel team, the Dirtbags, was forced to reschedule a tournament appearance to the would-be camp weekend, Flagler head coach David Barnett lost his only chance to see Holland on an in-person basis. Thus, despite intriguing video evidence, Barnett relented on extending an offer.

Holland, who reclassified to the 2021 class after transferring from North Johnston High, led Greenfield everyday starters at the plate as a sophomore with a .473 batting average in the Knights’ last full season of play in 2019. He drove in 21 runs and had four doubles.

Primarily a catcher for Greenfield and in the summer of 2020 with Wilson Team Elite, Holland will arrive at Brunswick with designs on being a two-way player after delving into the art of pitching during the summer. If at all possible, Holland hopes to play just one year at the JUCO level before moving on to what he hopes is the Div. I level.

“Every school that I was talking to wanted me two-way,” Holland said. “There’s a chance that I pitch, a chance that I play middle infield or I catch. I’m going in as a utility, a two-way, pretty much wherever Coach (Brunswick Community College head coach Robbie) Allen needs me, I’ll play.”

Prior to COVID-19, Holland didn’t hold any Div. I offers, but had engaged in conversations with the likes of UNC Wilmington, Campbell, Virginia Tech and East Carolina.

“JUCO is a great option,” Holland said. “It gives me two years to work and develop and play against college-level competition. And after that, go to a D-1, go to a four-year and have more experience than the kids that will be coming in from high school to those places. So I’ll have an edge on those kids.”

Arguably, the biggest hurdle between Holland and the goal of Division I baseball will be the ability to pack muscle onto his frame. While the lateral quickness is already in place with the catching gear on behind the plate, conversations in the recruiting process have centered around the need to bulk up to satisfy the demands of the college game’s top tier.

“Before COVID, when I was talking to D-I’s, some schools, they were telling me that they would offer me, but to be a catcher, I needed to add 10 to 15 pounds of straight muscle. I think if I can do that, and get 185 (pounds) of pure muscle, then I think I’d be set.”

The son of Jason and Mandy Holland of Micro plans to major in marine biology, marrying his two biggest passions since childhood — baseball and the ocean.

“I’m going to go and get my associates in science,” Holland said. “And after one or two years, hopefully only one because then I will have played great there and I’d go ahead to D-I. After I go to D-I, I want to go into marine biology. I’m just hoping as soon as I get to Brunswick, I just make an immediate impact. That’s what I want to do and that’s what I want to do after Brunswick when I go to a D-I. And I know that I am at a great JUCO for that.”