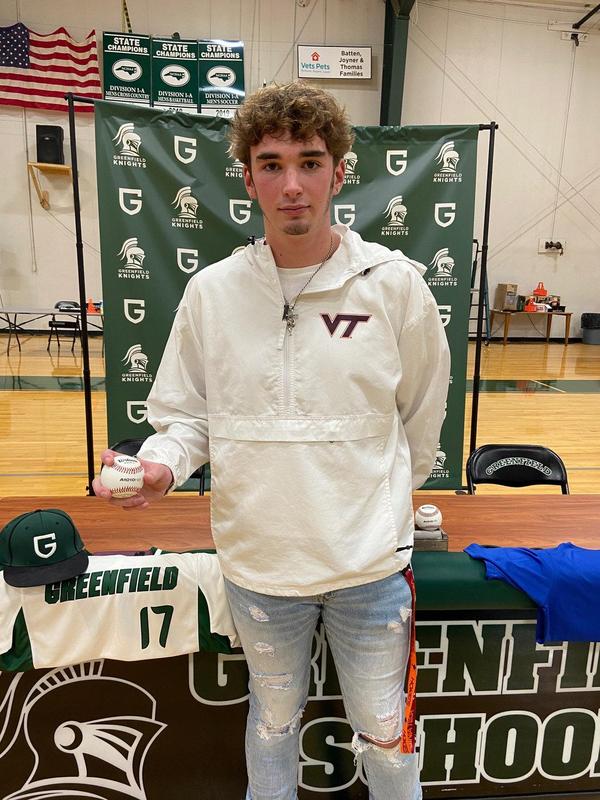 Greenfield School right-handed pitcher Nathan Woodard will continue his collegiate career at NCAA Division I Virginia Tech after signing a National Letter of Intent with the Hokies.
By Jimmy Lewis jlewis@wilsontimes.com | 265-7807 | Twitter:@JimmyLewisWT

Once upon a time, the moment was too packed with pressure for Greenfield School senior right-handed pitcher Nathan Woodard.

But to reach that fateful day when Virginia Tech pitching coach Ryan Fecteau scrolled through MaxPreps and just had to verify the authenticity of Woodard’s sophomore year numbers with the Knights requires a flashback to a diamond in Creedmoor.

Woodard, in his sophomore campaign at North Johnston High before reclassifying at Greenfield, was given the ball at South Granville to oppose southpaw Holden Laws, an N.C. State commit.

Most of the eyes on that March 2018 day were on Laws, who never signed with the Wolfpack and went to the Seattle Mariners in the 16th round of the Major League Baseball First-Year Player Draft just under three months later.

Woodard accorded himself well. He lasted six innings, striking out seven and walking four despite the 2-1 loss. He allowed six hits.

“It was the most pressure I’ve ever felt in my life,” Woodard recalled. “It was a record game for me at North Johnston too, because I had maybe 10 or 12 strikeouts or so, and there was 20-plus scouts in the stands and I’ve never been in a situation like that before. I feel like my coach never gave me an opportunity like that again to pitch like I could pitch. I messed up one game after that, and I never got an opportunity after that.”

But during the 2018 Golden Leaf Invitational, Woodard found himself on the business end of a 12-1 loss to Rocky Mount. He started and lasted just two-thirds of an inning, issuing five walks that led to five runs. None were charged to Woodard, per official stats of the game.

NCAA Division I baseball in the Atlantic Coast Conference never felt so far away. Woodard was, by his own admission, down and out as the curtain closed on his relevance in Kenly.

Woodard’s former catcher with the Panthers, Justin Holland, encouraged him to give Greenfield a try. But at first, the same nerves followed to Wilson, where the tall, lanky hurler had issues finding the strike zone. It was on Knights head coach Daniel Johnson and Benson pitching guru Earl Stephenson to take on the matter of rehabilitation.

Yet once Woodard posted his 2019 numbers with Greenfield — an 0.64 earned run average with 115 strikeouts and 26 walks in 54 1/3 innings, Fecteau became the first coach to initiate contact with Johnson, if only to verify that MaxPreps was telling the truth in a world of statistical scofflaws.

“He called me out of the blue one day and said that he was looking through MaxPreps,” Johnson said of Fecteau. “And he saw his strikeouts to innings pitched and he was like, those are crazy numbers. He called me up and said are these real numbers or are they inflated? I said no sir, these are real!”

While the Hokies were first on the trail, Woodard considered an offer from Campbell and had conversations with UNC Wilmington and North Carolina. Virginia Tech, under the leadership of head coach John Szefc, owned an 11-5 record and a 1-2 ledger in the ACC when COVID-19 halted the 2020 season.

A high-velocity fastball in on the hands resulting in weak contact or none at all has been the Woodard calling card when filling up the strike zone.

“I try to work my fastball in as much as I can,” Woodard said. “Most of them time, it’s sitting high 80s, low 90s. I think my top one is 96. I’ve never thrown that in a game yet, but I’m looking forward to my senior season and seeing what that brings.”

However, the Div. I level is full of hitters who crave poorly placed fastballs in leverage counts to drive into gaps. Woodard plans to further refine his off-speed offerings. A potent hitter in high school, Woodard is also a realist, knowing that his senior season with the Knights will likely mean the end of his time with a bat in his hands.

“That’s not what is going to get me to the major leagues,” Woodard said of the bat. “The fastball is my strongest pitch. I can’t explain how it moves, but it’s just always had some certain movement on it. It tails whenever I throw it, and it’s just crazy how it tails. My curve ball, I have on and off days. That’s really what I need to work on is my off-speed.

The son of Vince and Laura Woodard of Selma is undecided on a major. But before then, Woodard, and Holland by extension, have their eyes set on one more high school goal.

“Hopefully win a state championship,” Woodard said. “Justin and I, we’ve been working so hard for this the past three years. He’s the one that pushed to get me here and it’s a really high possibility this year. We have the tools and ability to do it.”